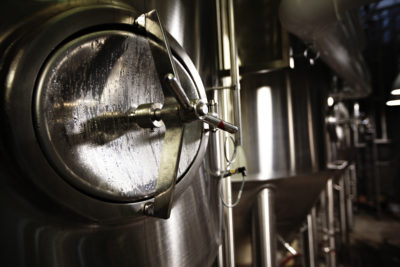 I touched on the cold fermentation in the yeast post. But we will use this post to further dive into it.  A few years ago there were some folks who rediscovered a novel approach to lager beer making, the accelerated fermentation schedule.

Mr. Narziβ details and outlines this process in what we refer to “Die” and Mr. Kunze also touches on in what is referred to as “Kunze“.

Now, I think there is a pivotal piece missing here, that piece is that both gentlemen are speaking of these fermentation schedules in regards to large cylindro-conical vessels, or CCV’s for short.  These are your standard large brewery “conical” fermenters. Depending on the size of these there can be very large amounts of hydrostatic pressure in these tanks, and it is known that static pressure can reduce ester production which could allow for a higher temperature ferment. Another piece is the ability to cap (spund) the fermenters, in order to retain some residual sulfur (another great antioxidant).

But for most of us attempting this at home, we are stuck with fermenters that don’t exhibit static pressures and can’t be capped. I was an early adopter of this accelerated process, I thought it was the best thing since sliced bread! I am a primarily lager only brewer, and I could turn out a fermented lager, ready to be force carbed in 7 days from brewday. I mean how awesome was that. I saw zero issues or detrimental effects from it, beers were super clean, ready soon, AWESOME…. until I went to low oxygen brewing. I was losing that fresh lingering malt in the fermenter… Every time. It wasn’t until the lowering and slowing down of fermentation that there was some headway made. Going back to what I refer to my brewing bibles, we found profiles like traditional cold, that started to be tested. However I was appalled that I was going to ferment a beer at 45 °F… 45 °F, would it even ferment???? For like the entire time, and no ramp??? Ramp they Laughed, yes there is a ramp.. DOWN, and at ~50% attenuation. I can still see myself shaking my head. It was a long ways away from my 55 °F ferments that took off like rockets. Begrudgingly I had to give it a go, but yeast… I needed a massive amount of it. I came up with a way I thought would work, ran it though all the yeast calculators, referenced the brewing bibles.. It was now or never. I  employed my yeast method and off we went.

Armed with my trusty DO meter, 5 packs of healthy fresh yeast and 5 gallons of wort,  I embarked on a journey, a journey that changed me forever.

If you break it down its like every other ferment, just a lot colder. Esters are suppressed, more CO2 infused, and more fermentation characteristics stay in the beer. You should see a healthy ferment, nice bubbling of the airlock, minimal lag time,  and all other signs of a good fermentation, just colder. We like to use nice malty Bavarian strains, also known sulfur producers (since we now know sulfur is our buddy in this). Wyeast 2206 is my house yeast.

Now the textbooks call for temperature ramp downs when certain attenuation’s are hit, and it can be really tricky. So we are going to take a slight ding in the head retention, and foam to make this much easier. I would start at 48 °F if its your first time, experts you can go lower if you would like. We are going to veer off the path a little from the textbooks and we are going to just hold our temperature for the entire time. We are then going to spund when the remaining extract is correct, and we know this because we did the FFT. Once in spund, we will hold the fermentation temperature until final gravity is reached. Its really as simple as that, no crazy ramps in any direction, just pitch and hold temp. With healthy larger pitch rates Diacetyl production will be held in check and there will be NO reason to every have to do a rest for it.

If you oxygenated per our post, and pitched yeast by our post it will be no sweat to get though this fermentation, you should be ready to spund in 5-7 days. Final gravity in 7-9. Be sure to check out the results achieved by these methods.