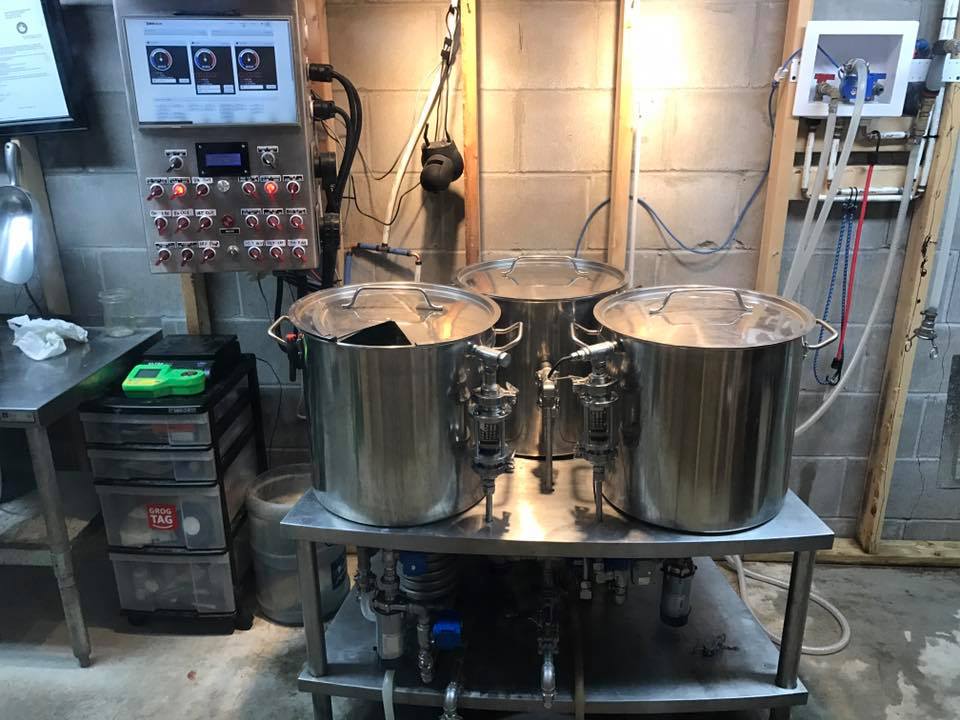 A few years back, once we discovered the secret to success, I did a quick brewery reconfiguration to accommodate the new methods. I ran everything with silicon hoses to allow for easy reconfiguration as methods and processes evolved. After 250+ batches I thought I had enough experience with the system to start to lock things in, and that brings us here today. I have had a lot of folks wanting me to show and detail what I have done.

The details were as follows, 2 pumps, 14 valves, and a pump manifold that allowed for any input to go to any output. I ran into some issues when wanting to do separate process’s and had the dreaded valve failure allowing for cleaning solution to mix with wort. I knew when I locked this in I wanted all vessels to be separate, I also had to use the HERMS coil as an immersion chiller in the HLT, and while it worked flawlessly, I would always mix up the hoses  (or forget to move them), so I wanted a more permanent solution there as well.

So it was time… I went out and looked at new pumps, I was ready to try something new. There is quite a bit of brewing pump variety on the market now, many more than the handful (2 to be exact) of pumps that were there when I starting building my old system in the mid 2000’s. Although, to be honest my choice of my little giant pumps has proven to have been an excellent one, I have never had a problem in probably 700+ batches with them. I was really intrigued by the DC pumps, and the ability to vary the speed on them, but in doing research I came across a new pump that was getting really nice reviews and it had a center inlet SS head, all for under $100. I decided to purchase 3 of the Mark II wort Pump’s and the SS pump heads to go with them.

I really love my William’s Brewing SS convoluted CFC chiller, but they stopped making them. I knew I wanted some kind of chiller directly attached to the HLT for pre-boil cooling, I scoured the HB classifieds, and low and behold I found a twin of my chiller and bought it ASAP!

My old, old system (the NY Times article era) was all hard piped with SS tubing, and I really liked that. Being low oxygen, tubing solubility is actually a thing, and its hard to beat SS in that department.  The SS tubing is also a bit smaller, which restricts flow (a good thing for me) and means less liquid in the tubing loss to deadspace. I mean who doesn’t love SS and hardpiping, right?!?!.

I decided to start with building the boil kettle first, as it was the simplest vessel. The configuration is:

Valve on BK out

Flow control valve on pump out

Temp probe in BK, CFC out, and CFC cooling water in

Flow is as follows, BK out, to CFC in, CFC out to BK in

Pretty straight forward, with this setup I lose 16oz/.125gal to deadspace.

Next up was the HLT, it was the same basic premise, with one more added valve.

Valve on HLT out

Valve on CFC in

This one is pretty straight forward as well, with this setup I lose 2oz/.0156gal to deadspace.

Lastly was the mash tun, this one is a bit more complicated.

Valve on MT out

Flow control valve on pump out

Manual valve for draining of all wort (lowest point)

Temp probe on MT out, and MT in, uses averaging, able to maintain .1F setpoint

Flow is as follows, MT out, to HERMS (cool or heat) in or MT out, to BK underlet.

Using this configuration, I actually have no measurable dead space in the MT as I can open the manual valve and completely drain the loop.

Finally all configured and wires dressed:

Had to do some temporary panel changes, and redo some automation controls:

Some pictures of the first brew session after the configuration change:

Video of the pumps running during the first brew session:

All in all everything went flawless, and wort was produced!

One thought on “Modern Brewhouse Reconfiguration”