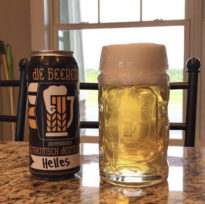 I have been eyeing a canning setup and researching industry best practices for canning methods for some time. Knowing what we know about oxygen ingress in general, it was not very difficult to realize that oxygen at packing was a very large concern. I went back and forth over it for quite awhile, but finally decided to move forward with canning.

I chose to go with the MK16 seamer from Oktober. They sell all you need to get up and running: the seamer, cans, lids, and holders. I chose to design my own labels and get my cans directly from a can manufacturer. Once my seamer and can order was placed,  I took the 4 weeks of lead time to try and develop a process. I used that time to review Kunze and his diagrams, reach out to canning line manufacturers, and talk with professional brewers. Enter, the R&D phase.

I noticed some of the sophisticated can fillers used a counter-pressure filling method. It gave me some ideas, namely The Counter-Pressure Can Filler (CPCF for short) shown here:

I came up with another option which utilizing a beer gun ( aka the “poor man’s bottle filler”). This was going to be used in my first go-round, which we’ll discuss in more detail later.

After all my R&D was done the main points I took away were:

Until I got my process down I chose to use a simple beer gun method, and I used a standard drinking glass, which was roughly the size of my cans, to gauge fill rate and foam production. The CPCF would need me to be much more “in tune” with the filling than I would be starting out, and due to the lack of foam as your O2 barrier I would have issues. The sophisticated commercial machines use a “chamber”  where they can remove the CPCF head and puff the can with CO2 and put the lid on free of any O2, and they also fill by weight. I am not there yet.

So back to the beer gun and glass. It’s a crude method but works quite well. It usually takes a glass or 2 to get the right parameters, and after having practiced using the glass, I can be quite confident going forward. This stange happens to be almost identical to a can.  Here is that setup:

After a few long weeks things started to show up. First the cans, as I said earlier I chose to order bulk and go directly to a can manufacturer. I uploaded my artwork, got some digital proofs and hoped for the best. Here are the cans showing up:

Later that week I took delivery of the MK16. I am VERY impressed with the build quality of the seamer!

After having all I need to start I started setting up a “fill station”. Quickly, I  realized the need for a steamlined operation. I started to modify the MK16 to help with that. I love the portability of the unit, but I also wanted it to be as self-contained as possible. The first modification I made was to fabricate a shelf for the cans to sit on as they were filled.

After the shelf was made, I wanted a holder that could support one hand operation of the filler so I added a 1/2″ T fitting to allow the beer gun to rest. Here you can see that and the glass all ready to start testing:

I use a baking sheet to set the MK16 on and that catches and contains all the excess beer, it works really well!

Video overview of the mods:

Now that everything was in place, it was time to go on a full canning run. But first we need to talk about the packaging boogeyman: Total Packaged Oxygen (or TPO for short). This shouldn’t be confused with Dissolved Oxygen though, this is a different animal.

“What is the difference between dissolved oxygen and total package oxygen (TPO)? The main source of this confusion is that when measuring O2 in packages, the O2 in the headspace is often overlooked. If you don’t take headspace oxygen into account, then you are measuring a partial concentration, period. So let’s talk about the differences and what each one tells you.

A significant number of craft brewers have a dissolved oxygen (dO2) analyzer they use to measure the dO2 content of their beer in process. The most common point of measurement is the finished beer tank. The beer in a finishing tank will have O2 pickup from the empty vessel and from the filtration process, plus it will pickup more O2 as it goes through packaging.

Once the beer is packaged, however (assuming good packaging,) rapid O2 pickup from outside sources all but stops. So what can we tell about how much oxygen actually made it into the package?  It is not a simple matter of measuring the O2 in the beer.  The package must be shaken to equilibrate the oxygen in the beer and the headspace before the O2 in the beer is measured, and that number must then be used to calculate your TPO. Let’s think about what it is possible to measure and what each thing tells you.

The easiest measurement to take on packaged beer is the dO2 of a package just off the filler without shaking the beer. It is important to measure as quickly as possible, so the product does not “consume” the oxygen in the beer. (Residual or live yeast may be hungry, plus oxidation by trace metals, etc.) In some packages there is a measurable difference within five minutes and in other packages the rate of oxygen consumption takes significantly longer, sometimes hours. It is always best to measure as quickly as possible.

This unshaken package measurement represents the combination of the dO2 of the beer at the base of the filler and the oxygen pickup of the filler. Oxygen picked up at the filler can be quite variable. Most fillers run at about 25 to 50 percent deviation, but in some cases it can be up to 100 percent deviation. The best way to measure the percent deviation is to determine the dO2 at the base of the filler and then measure six to ten packages and determine the variation of each package as compared to the average of all the containers. But remember: this measurement only tells you what is in the liquid. When measuring unshaken packages, any gas in the headspace is left uncounted.

So, you have measured the dO2 and then shaken the package. Now what do you do with the data? If you really want to quantify the TPO of the package you have to take into account the headspace oxygen. To do this accurately you need to know the headspace volume and the package temperature.

When using the dissolved oxygen measurement, the TPO can only be calculated from a shaken package. To do this calculation you also need to know the headspace volume, liquid volume and the package temperature. The temperature and the headspace volume are critical values and small inaccuracies can alter the results significantly, but the liquid volume may be estimated by using the average fill volume. Once you have your figures, then you can use a TPO calculator to determine the concentration from your initial dO2 measurements.”

-taken from Hach Instruments and is a great summary of TPO.

So with that said we have 2 great hurdles to overcome with our beer: DO and TPO. If we spunded we will have very low DO levels going into the canning phase, but filling the cans will most certainly pick up some DO, and TPO. So we want to minimize that, so how to we do it?

So now we know about the DO in the sanitizing water, we want to go into the cellar/filling room and get an overview on the pieces parts of the filling process.

Filling the cans isn’t super fast, but its quick enough. The beauty of cans is that once packaged you will have no oxygen ingress much like a keg, but with the mobility of bottles (without the cap oxygen ingress). Once you get the methods down its pretty easy, and lets not forget how cool it is to see your beer in a can!

Here is a video of me pouring my first canned beer, Prost!:

Just using the “Me” test I do notice some flavor fall off at about a month. I need to refine my process, and once I feel more confident in the process, and methods I will send the cans off to be professionally tested for TPO. I put a video together with all the steps and process laid out here in once video. I hope you find this information useful! Happy Canning!

Total package dissolved O2 is what we are measuring in the photo’s, and as you can see I was well below commercial standards! As an aside the brewery that was testing the cans measured their beers at 35ppb. I would consider this a win!

Thanks to Scott Janish for the photos of the testing results.