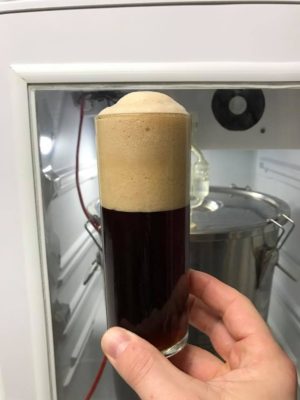 After reading and trying some of the techniques outlined in this article, I was able to achieve a better product with faster fermentation, clearer beer, better foam and a better, longer lasting brewery-fresh taste. I will first show some excerpts from literature, and then show how I implemented them on the homebrew scale.

Kunze in “Technology of Brewing and Malting (5th Edition)”:

During malting the lipids are partly broken down and this breakdown is continued during mashing. This breakdown will later be of great interest to us. A large part of the lipids is later precipitated with the trub. Cloudy lautering and poor trub excretion lead to large amounts of free fatty acids in the wort, which the yeast cells require to produce new cell substances, but which can also contribute to a reduction in flavour stability.

Removal of the coarse break (coarse trub). The break from the cast wort is now called coarse break, as well as boiled or hot break. It consists of large particles, 30 – 80 μm in size, which are slightly heavier than the wort and in general settle down well to form a compact mass if they are given sufficient time. The coarse break must be removed since it is not only of no value in further beer production,but also actually detrimental to quality:
• Hinders wort clarification

• Makes beer filtration more difficult if it is not removed at the right time.

Whirlpool – Whirlpools have been installed for break removal in increasing numbers since about 1960. It is the most elegant method for hot break removal and is the least costly alternative of all trub removal methods.

Cold break – At about 60 °C the previously clear wort will start to become turbid. This turbidity is due to small particles about 0.5 μm in diameter. This is therefore called fine, cool or cold break (cold trub). Because of its small size, cold break settles only with great difficulty…It has the property of adhering to other particles, e.g. yeast cells or air bubbles. When it adheres to yeast cells it decreases the yeast contact surface and thereby reduces the fermentation rate. This is referred to as “coating” the yeast. Cold break consists of protein-polyphenol compounds which precipitate to a greater extent in relatively cold media and partially dissolve again on warming. This means that wort on cooling to 5 °C still contains 14% of the total cold break in dissolved form. A residual amount of cold break at discharge of 120-160 mg/I dry matter is desirable [199]. A reduction of the cold break content to approximately this value can result in:

• A more rounded beer flavor, particularly in the bitterness

• An improvement of the beer foam (as a result of the precipitation of fatty acids),

• An improvement of the flavour stability

To remove the cold break the following methods can be used (Sect. 3.9.4):
• Filtration (using Perlite)

• Separation.
The cold break is only formed later after the coarse break has already been removed. Separate equipment is therefore required for the removal of coarse and cold break. Nowadays the cold break is not usually removed. A prerequisite for this, however, is an optimal hot break removal and fermentative yeast (assimilation yeast). With a powerful course of fermentation, a distinctive flavour, good flavour stability and good foam stability can be expected.

So what does this mean for Joe low oxygen brewer. I think if we break it down it means this:

I think with minimal effort we can make something work for us as most people are already doing many of the steps. Here are some examples of what I do.

I utilize a HERMS recirculating mash, that recirculates the entire time. This is going to help us in many ways, homogeneous mixing for consistent temperatures and gravities, and using the husks as a filter bed are two of the main ones. I took this one step further and I use a custom mesh bag in addition to a custom false bottom in my mash tun. I also use the technique of grain conditioning. All these process’s combine for allowing me to leave all the undesirables in the mash tun (fats, lipids, tannins, etc) and give me a pristine wort preboil. Here are some photos of my preboil wort.

Proper mash pH along with some trub free wort is going to allow for some really nice hot break to form. Getting nice clear wort into the kettle is only going to further help you get clearer beer in the later stages of  your process. After about 10  minutes into the boil I start to see some really nice white hot break form. You will also notice there is no brown in my boil foam,  all that  gunk was left behind in the mash tun!

After the initial foam up is over here is a shot of hot break and boil intensity.

After about 55 minutes of boiling I will start my whirlpool to sanitize my CFC chiller, and you can really get a feel for the nice level of hot break achieved.

At flame out I will chill to below 120F then use my lauter cap and continue with the rest of the chilling. What I do next is season dependent. If it is summer, a simple whirlpool to about 68F is employed, then a quick rack to another fermenter. That fermenter is then put into a chest freezer at the lowest temp it can achieve, and the wort is allowed to chill and separate from there. Here is that process.

A whole lot of gunk left behind, and this is what the beer looks like going into the fermenter.

Not brilliantly clear, but I will call it the perfect amount of trub left over to be helpful and not hurtful, as Kunze spoke about.

In Spring, Fall and Winter, I am lucky enough to have cold enough ground water to chill below fermentation temp right in the kettle, and do my separation in there. To achieve this I chill to as low as I can go, usually that is around 43F. I already have my lauter cap on, so I preform my 45-60 minute rest right in the kettle.I have bottom draining kettles (that I pull from the side) so I just pump slowly as to not disturb the trub right into the awaiting fermenter.

This is after the rest, one the lauter cap was pulled.

If you look close enough you can see the hose resting on the boil coil, and the boil coil itself. Although the picture doesn’t really show it, you can actually see the bottom of the kettle. Again I would like to point out the lack of nasty gunk on the kettle sides… All that was left in the mash tun where it should be.

As I slowly pump out the kettle, the trub pile from the whirlpool is exposed.

Then I am left with a pile of hot break, cold break and hops.

The resulting wort going into the fermenter.

I feel this leaves the perfect amount of residual break material to be beneficial to yeast health, but not manifest itself to the undesirables. I see my yeast take off in 4-6 hrs every time and I see great healthy fermentation that even at 45 °F are to gravity in 5-7 days with a moderate ABV lager. Since there is no trub my beers can clear faster as well. I only have to wait for the yeast to flocculate out, not all the rest of the matter.  There is minimal amounts of fats and lipids in the beer, these are known staling components. Because of this the beers are fresher, ready sooner, and last longer. Even if you did not see a taste and beer health benefit, because I harvest my yeast it is worth it alone. When I recover my yeast I am left with almost PURE yeast with no trub. Because of this I can put them away with extract remaining in a nice environment where they can slowly still feed and grow accustomed to colder temps. I never have to wash or handle the yeast, which leads to more pathways to issues.

When doing all these methods we speak of here, they come together into the culmination of world class beer, from your home. Beating many of the breweries you may have revered at one point or another. A recent Schwarzbier brewed using all these methods. It should speak for itself.

Liked it? Take a second to support admin on Patreon!

4 thoughts on “Trub Seperation- Why and How”