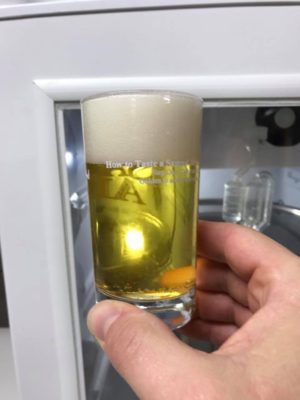 Earlier we spoke of the importance of these 2 procedures, but a recent post on the homebrew talk forum along with a recent re-read of George fix’s book “Principals of Brewing Science”, made me think about writing a quick post about it.

One thing I think ALL parties can actually agree on is the subject of cold side aeration, or CSA for short. George said it well here:

“The deleterious effects of oxygen uptake at any point in the brewing cycle is well documented. The only exception to this is the oxygen introduced at the start of the fermentation. It is true that there is a considerable variation among beer drinkers both with respect to their ability to detect oxidized flavors, and with respect totheir acceptance of these notes. Yet the track record is clear in both amateur and commercial brewing: Consistently successful brewers are invariably the ones who operate low oxygen systems. For most of the twentieth century, attention was focused on oxidation occurring after the end of the fermentation-so-called cold side aeration (CSA). Concerns about CSA are well founded since there are a number of relevant mechanisms, all of which are destructive to beer flavor.”

CSA is all over in any brewing texts and a simple google search will yield countless results. However George lays it out well here:

“Methods for such optimization are covered in, for example, in the references by Bamforth (1999) and Fix (1998). Following C. D. Dalgliesch (1977), it is useful to characterize staling in terms of three basic stages:

• Stage A is the period of stable, “brewery-fresh” flavor.

• Stage B is a transition period in which a multitude of new flavor sensations can be detected.

He goes on to list an overview of the stages, the highlights of them being:

“Stage A beer is pristine in flavor. During stage B, Dalgliesch described a decline in hop aroma, a decline in hop bitterness,an increase in “ribes aroma” (or sometimes “catty” flavor), and an increase in sweet, toffee-like, or caramel tones. The terms ribes (or currant) and catty are widely used in the United Kingdom and Scandinavia to recall overripe or spoiled fruit or vegetables. Some tasters cite a “black currant” tone (Hardwick, 1978). In truth, these terms describe a wide spectrum of negative flavors developed when beer is in stage B. Toffee or caramel flavors can come from many sources, but those associated with staling will invariably have unattractive cloying notes. These effects are enhanced by residual diacetyl and also by excess heat treatment of wort. Finally, stage C products range from papery or leathery to sherry- or vinegar-like notes.”

While I will absolutely agree we rarely see the last stage of oxidation, we will see at least some of them. I hear about “B” ALL the time, and that is directly due to oxidation while kegging, or coming to complete fermentation and racking. I am here to tell you it doesn’t have to be this way! What we laid out in our earlier posts a surefire way to brewery fresh flavors almost indefinitely.

I get a lot of questions to show actual data, so today I will do just that. Let use for example a batch of Export Helles. This beer was brewed using our low oxygen methods as usual. Here is the post boil sulfite reading:

So starting at nearly 0 for sulfites. Yeast was oxygenated, pitched and then tucked away for the cold fermentation. 5 days later with about 4 gravity points remaining the beer was transferred to an awaiting keg that was properly purged using the following method. Filling the corny as full as possible with a low oxygen, low foaming (foam contains oxygen!) sanitizer, which for us would be saniclean or Iodiphor. What I do to accomplish this is fill the keg as full as possible with a T from the faucet I made to fill using the in and out posts of the keg. This fills the keg from the posts. I then just open the PRV on the keg, this will fill with water from the inside and when completely full, water will exit the PRV. I then close the PRV and pop off the connectors. I now have a keg that is as full of sanitizer as possible. The keg is then hooked up to a CO2 tank (gas in) and the CO2 is then used to push all the sanitizer out of the liquid out. You are now left with a CO2 filled keg.

As part of my spunding procedure, I always check: Gravity, pH, DO, and Sulfites. I love to see what those yeast did with their time. Doing a traditional cold lager fermentation with a true Bavarian yeast strain is going to generate and retain a lot of yeast derived fermentation sulfites. We all know from this paper I recently translated that sulfites are great antioxidants. Here is my post fermentation reading:

These sulfites are not only going to help me during the transfer to spunden, but they will continue to help me through lagering and serving. Because, we all remember that our co2 we use is not pure enough to not actually oxidize our beer as we serve it (especially if we force carb it!). Even with food grade (99.9% pure) co2 will contain enough oxygen to potentially oxidize your beer past the point of no return. Brewing Literature recommends at least 99.997% pure co2 for force carbonating.

The beer was allowed to come to final gravity under spunden, then slowly lowered to lagering temps where the beer conditioned for some time. When the time comes for serving, my first thing I always do is test DO, here is the DO reading for this beer:

While not the best picture, it gets the point across.. It bottomed out the meter. This means this beer is as fresh as its ever going to be, and it made it this way all the way though serving. Of course the second thing I do is pull a glass and enjoy a sample!

Beer like this with these readings will be brewery fresh to 9 months and beyond. There is no way you can achieve that with out the components I listed above, so cheers to brewery fresh beers!